The launch of version 2.1 of Genshin Impact from miHoYo on September 1 saw the title generate $151 million in its first seven days of going live, more than the title accumulated in the full month of August, Sensor Tower Store Intelligence data shows.

As Genshin Impact approaches its first year anniversary at the end of the month, publisher miHoYo has already kicked off celebrations, promising a series of updates and events. With Version 2.1, known as Floating World Under the Moonlight, new characters have arrived such as Raiden Shogun and the free PlayStation-exclusive Aloy from Horizon Zero Dawn. The latest update also sees the introduction of never-before-seen islands for players to explore, as well as a new weapon event wish and fishing system. A special Streamer Recruitment Event is also taking place, rewarding Twitch streamers with Primogems in-game for gaining new followers.

During the seven days from August 25 to 31, the game accumulated approximately $31 million in gross revenue globally across the App Store and Google Play. Between September 1 to 7, when version 2.1 was released, player spending saw a nearly five times increase compared to the week prior, rising to $151 million. That means players spent $21.6 million a day on average over the past week, compared to $4.4 million the week prior. 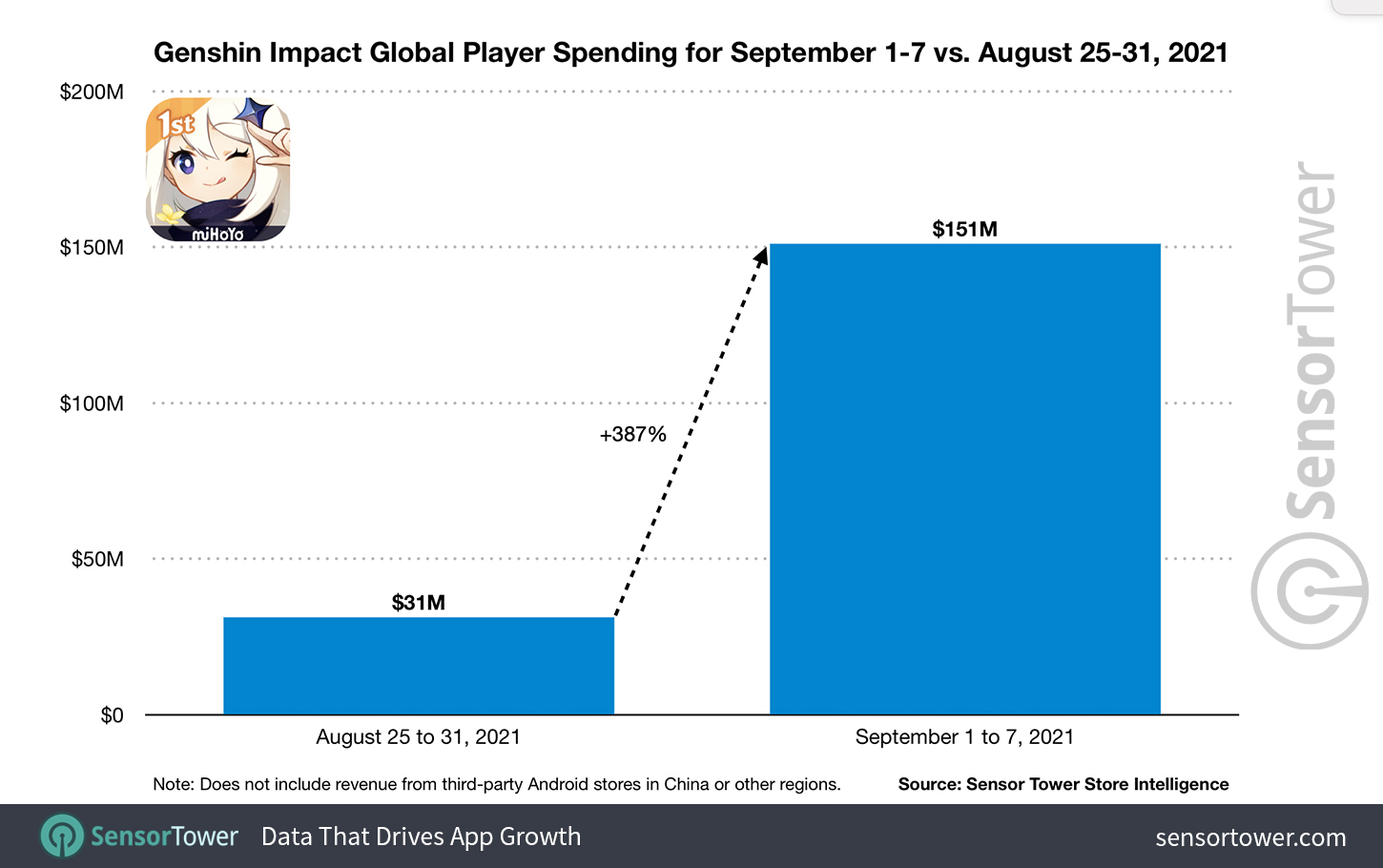 China and its App Store accounted for the largest share of revenue from September 1 to 7, generating $55.7 million, or approximately 37 percent of total player spending during the period. (Sensor Tower does not track spending on third-party Android stores in China or elsewhere.) The United States ranked No. 2 at 20 percent, while Japan ranked No. 3 at close to 19 percent. Of the top three revenue generating countries, China also saw the fastest growth, with player spending seeing an approximately 9.7 times increase from the seven days prior. Revenue in Japan saw a 4.4 times rise, while U.S. player spending experienced a 3.5 times increase.

The launch of version 2.1 puts the title on track for its most lucrative month ever, with September already proving to be its best month since March 2021 and third highest grossing since the title’s launch. To date, Genshin Impact has accumulated close to $1.9 billion in lifetime player spending worldwide from the App Store and Google Play.

MiHoYo has put a strong emphasis on live operations ever since the launch of Genshin Impact on September 28, 2020, regularly introducing significant new content and characters to the title to keep players engaged. Since its release, the title has been the No. 3 revenue generating mobile game globally, behind Honor of Kings from Tencent at No. 1 and PUBG Mobile from Tencent at No. 2, and above hits such as Pokémon GO from Niantic and Roblox from Roblox Corporation, which rank No. 4 and No. 5, respectively.