Since our previous analysis on the impact of games industry M&A, there has been no sign of a slowdown in the race to acquire talented developers across the globe. The past year has seen a host of big money deals, such as EA’s purchase of Glu Mobile for $2.1 billion, and its recently closed $1.4 billion swoop for Playdemic. Other major acquisitions include MTG’s deal for Racing game specialist Hutch, worth up to $375 million, Take-Two’s $378 million purchase of Top Eleven studio Nordeus, Jam City’s $165 million buyout of Ludia, and many more acquisitions, investments and fundraises.

Utilizing Sensor Tower’s Game Taxonomy, Game Intelligence tools and Store Intelligence platform, we analyzed several of the top genres by player spending in the United States from January 1 to August 31, 2021 to look at how the heated M&A market is impacting the industry. From this data, we can see how a publisher’s portfolio of titles is performing in a particular category, while also identifying how new launches and M&A activity have impacted the market. In some cases we have applied player spending retroactively to show how market share has changed.

Between January 1 and August 31, 2021, Activision Blizzard, which includes King, maintained its position as the No. 1 publisher in the Puzzle genre. The company generated approximately $873 million from percent of U.S. player spending, spurred on by the best start to a year ever by its flagship title, Candy Crush Saga. Playrix, meanwhile, generated $625 million from its puzzle titles, which include Gardenscapes and Homescapes. 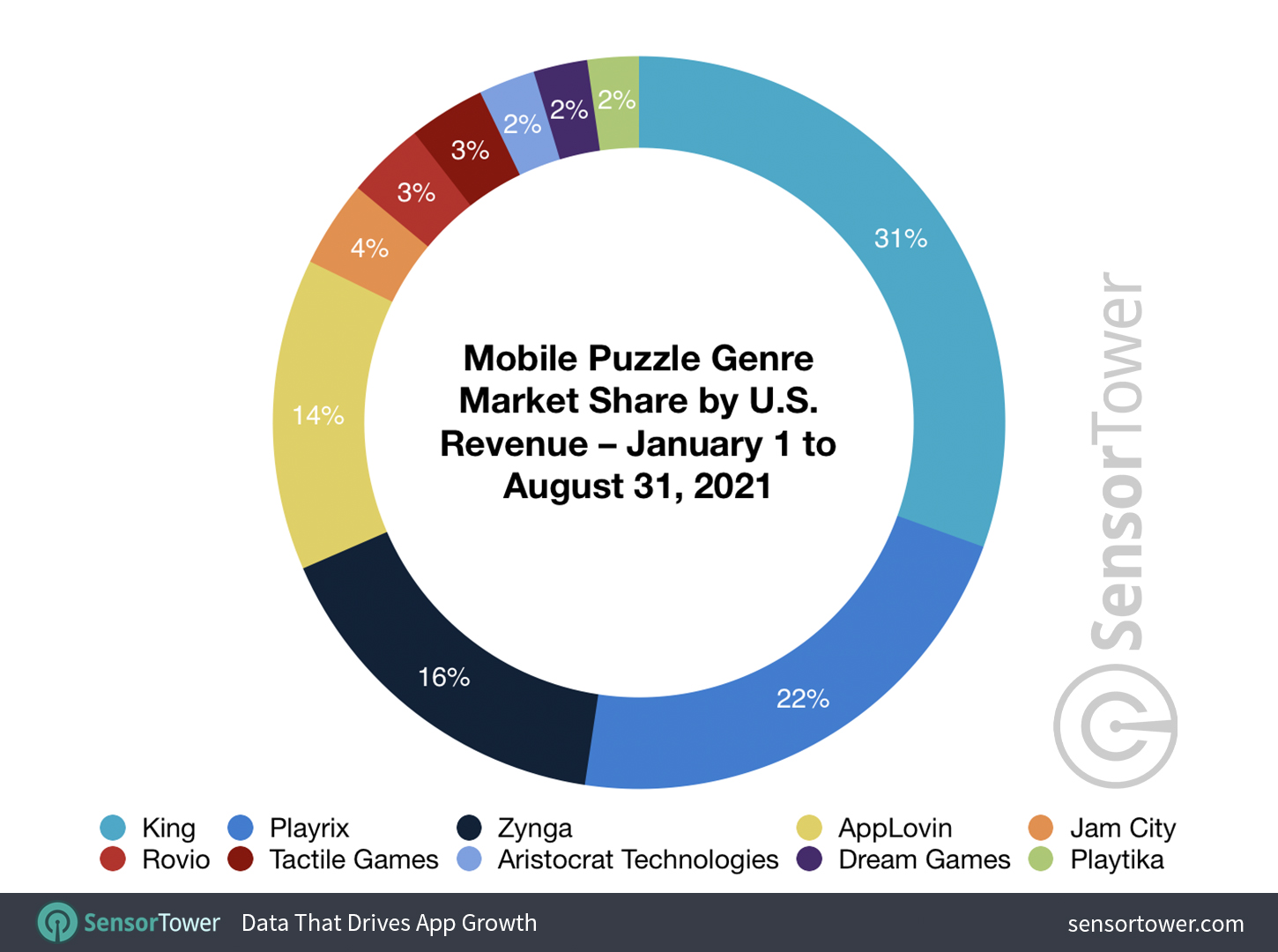 AppLovin has grown its share in the Puzzle genre significantly with key acquisitions, generating approximately $394 million during the first eight months of 2021. The publisher’s top titles include Project Makeover and Matchington Mansion, both from Magic Tavern, which it acquired in January 2019. Other key strategic investments include Clockmaker developer Belka Games and Wordscapes studio PeopleFun, which have helped AppLovin become a major player in the Puzzle space.

EA became the No. 1 publisher in the Lifestyle games genre between January 1 and August 31, 2021, accumulating approximately $123 million. This is thanks to its $2.1 billion acquisition of Glu Mobile, the publisher behind titles such as Design Home, Kim Kardashian: Hollywood and Covet Fashion. 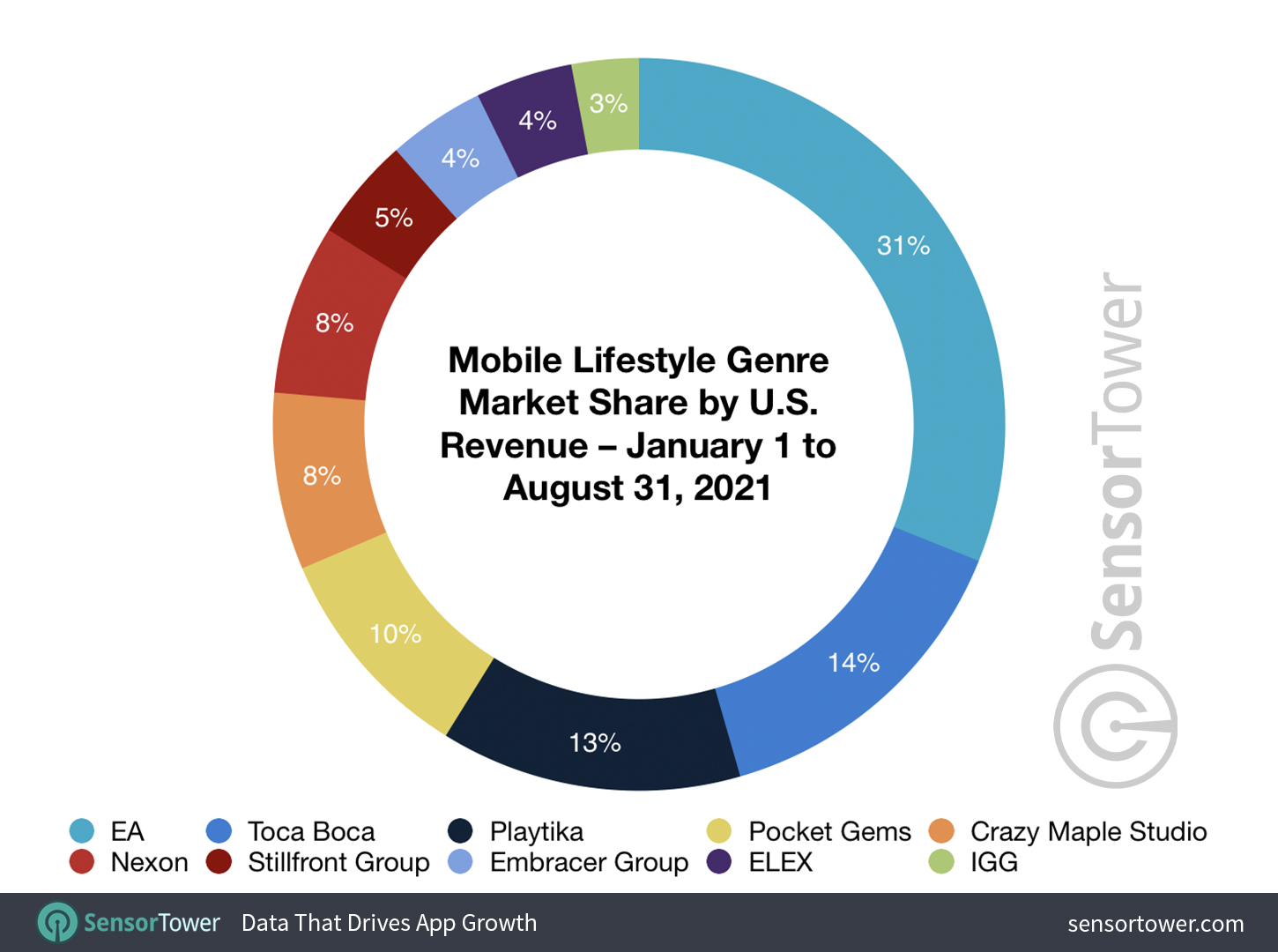 Playtika ranked as the No. 3 publisher in the Lifestyle genre, accumulating $53 million during the first eight months of the year. The company’s only title in the space is Redecor from Reworks, a developer it acquired earlier this month in a deal worth up to $600 million. Elsewhere, Stillfront Group has claimed the No. 7 spot, generating more than $18 million from player spending in Lifestyle games during the period, thanks to its acquisition of Hollywood Story: Fashion Star developer Nanobit in September 2020.

As in the Lifestyle genre, EA also ranked as the No. 1 publisher by U.S. player spending in Sports, generating approximately $176 million during the last eight months. While the company previously had its own mobile titles such as FIFA and Madden NFL 22, the acquisitions of Glu Mobile and Golf Clash developer Playdemic has seen it rise to the market leader in the space. 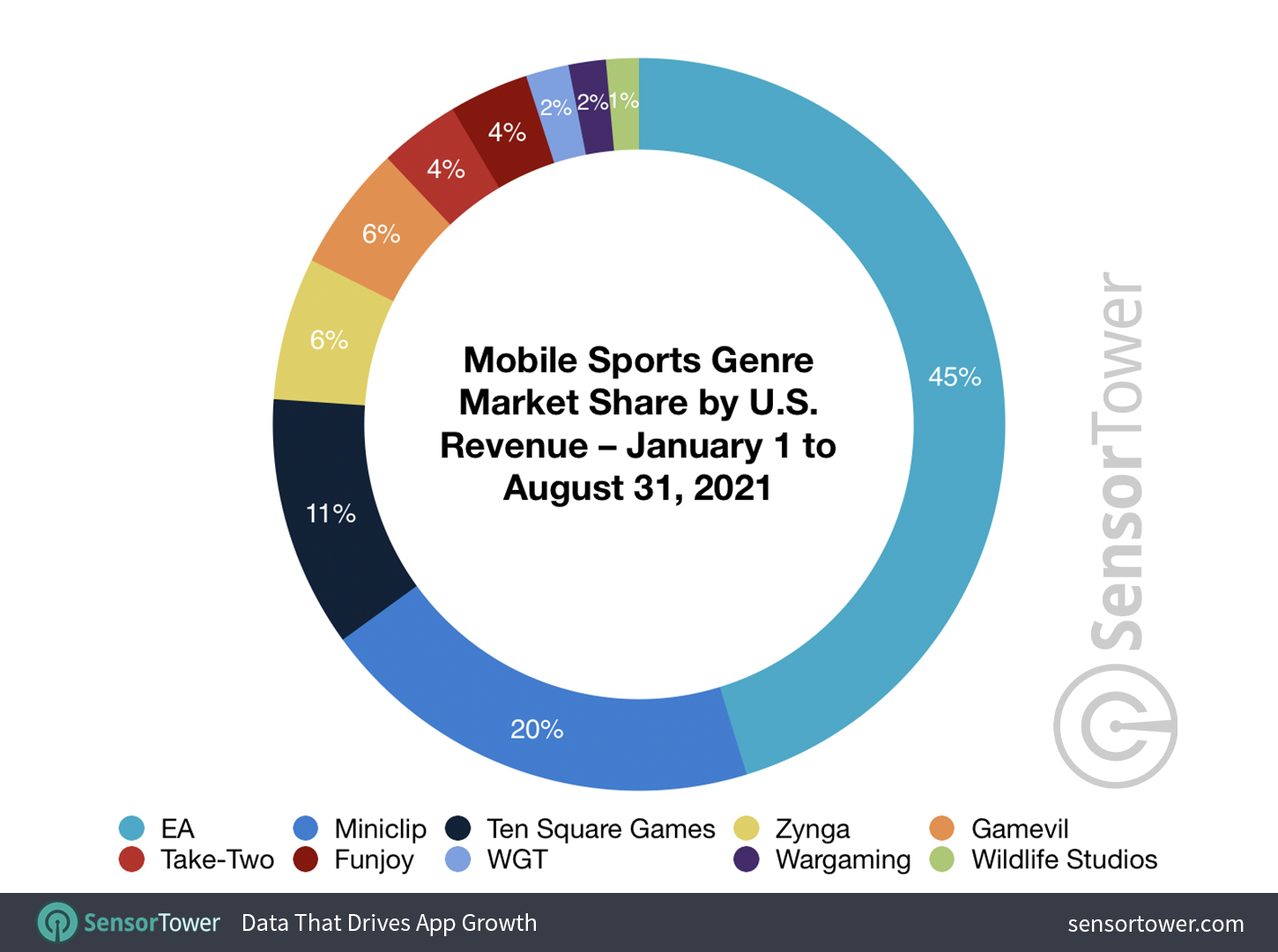 Miniclip ranked No. 2 for mobile Sports game revenue during the period, accumulating $77 million. The publisher’s Sports portfolio is led by its flagship title, 8 Ball Pool, and also features titles from recent acquisitions, such as Head Ball 2 from Masomo, which it purchased in 2019. Other publishers in the Sports genre making notable acquisitions include Zynga’s purchase of Golf Rival and developer StarLark for $525 million, and Take-Two’s deal for Top Eleven developer Nordeus, worth up to $378 million.

Voodoo ranked as the No. 1 Hypercasual games publisher in the U.S. during the last 10 months, picking up 139 million downloads. AppLovin, meanwhile, which counts its subsidiary Lion Studios in the genre, ranked No. 2 with approximately 96 million installs. 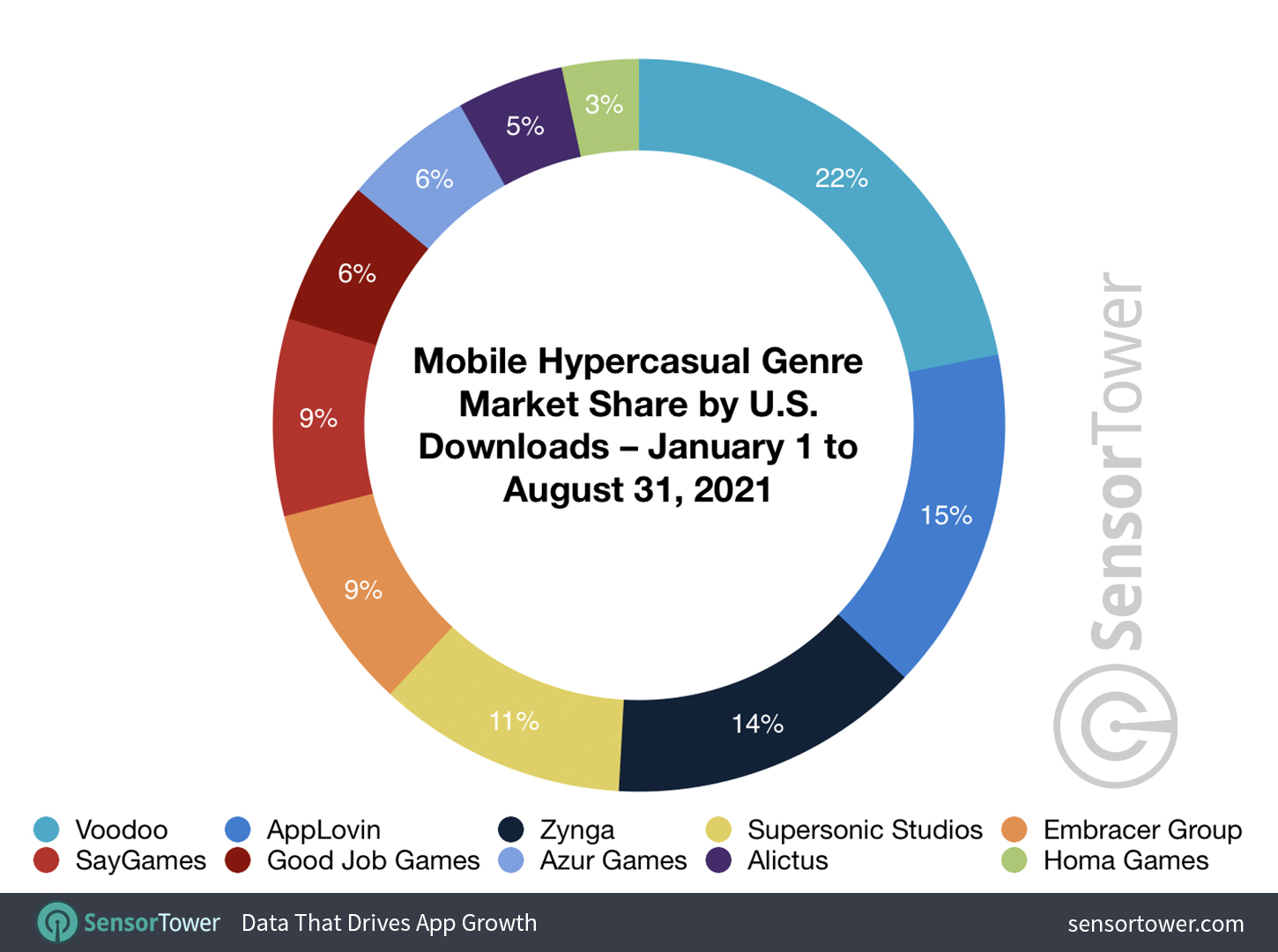 Zynga ranked as the No. 3 publisher for downloads market share in the genre during this period, thanks to its acquisition of Rollic Games in October 2020. Embracer Group now also takes up a significant share of the U.S. market, following its purchase of Crazy Labs in August 2021.

A maturing market, a lockdown bump, and intense competition are some of the factors that have led to a continued M&A frenzy in the mobile games industry. Major publishers, whether historically on mobile or focused on other platforms, are looking to increase their footprint in the sector and expand across different genres. One key acquisition or a string of smaller, but still significant, purchases can turn a publisher into a genre leader in a small amount of time. As the big publishers obtain greater market share, there seems to be little sign of M&A slowing down in such a highly competitive market.